COVID-19 Information OHA "How to Find a Vaccine" Page Read On...

On October 28th, the Urban Area Planning Commission voted to continue the Urban Growth Boundary (UGB) Rezone public hearing until December 9, 2020. Prior to the October 28th meeting, the City of Grants Pass received a letter from the Oregon Dept. of Transportation (ODOT) requesting the hearing be continued due to concerns about the number of new vehicle trips generated as a result of the rezoning. City staff are engaged in ongoing discussions with ODOT staff about their concerns and the best avenue to address those. We do not anticipate having a resolution prior to the December 9th hearing and are currently expecting another continuance.

The December 16, 2020 City Council public hearing for this project has been postponed

Following the virtual community forum and public comment period, the City will consider community comments when preparing revised rezoning maps.  Revised zoning district changes will then go through an adoption process scheduled to begin in fall 2020. Interested community members will have an opportunity to provide comments at all public hearings. A schedule of those hearings will be posted to this webpage as dates are confirmed.

The City of Grants Pass has initiated a process to rezone approximately 545 acres of rural, county-zoned properties to city urban zoning districts that implement the city’s adopted Comprehensive Plan districts for those properties. These areas are currently within the city’s Urban Growth Boundary (UGB), but outside of city limits. This is a much-anticipated step in achieving the community’s goal to expand the city’s buildable land inventory. 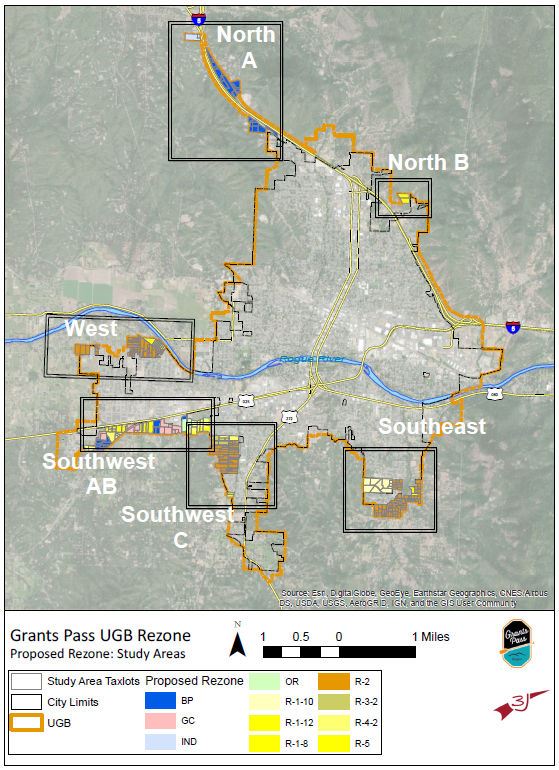 In 2014, the City of Grants Pass expanded the UGB to accommodate forecasts for increased growth and population. With that expansion, there are approximately 1,600 acres of land currently within the UGB, but outside of city limits. Some of these properties already have been zoned for urban development, consistent with a joint city-county agreement that permits urban rezoning of rural lands within the UGB to better facilitate the transition from rural to urban development. The city-county agreement does not require that lands be annexed to the city prior to application of urban zoning. There are approximately 545 acres remaining within the UGB that still have rural, county zoning and have not been rezoned or annexed for urban-level development.

For ease of discussion, the city is using five UGB Rezone subareas.