The department consisted solely of volunteer personnel with the firehouse located in what is now an alley on "G" St, between 4th & 5th streets. The building housed a crude hand drawn cart and a modest supply of fire hose. On May 1, 1892 fire department members organized the first ever "fireman's ball" held to raise money for much needed supplies. A grand total of twenty five dollars was raised at the ball, enough to outfit a portion of the members with a black hat, belt and red shirts. 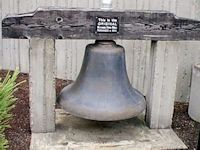 Within 2 years the city purchased a bell from the Blymer Bell Company for $165. The bell weighed an astounding 865 pounds and was 40-inches in diameter. The bell was placed high above city hall located at what is now 4th and 'H' Streets. The bell could be heard from as far away as the top of 6th and Front (now known as 'A') streets. The bell had a distinctive tone which could easily be distinguished from nearby church and school bells. It was rung vigorously to notify volunteers of an alarm. The bell can still be seen today on display in the tower above the Parkway Public Safety Center.

As the city grew, so did the need for up to date technology. The mayor and city council recognized that the Fire Department was a much needed asset for assuring the safety of the townsfolk. The decision was made to purchase the department's first hook and ladder truck for $574 dollars. This was in addition to the hose cart the city already owned. This was the first major apparatus purchase for the department. It was hand drawn and held ladders, buckets and long handled hooks for pulling apart a burning building.

In 1911 the city acquired an American LaFrance pumper, "Engine 1". There is some debate as to whether or not Portland or Grants Pass was the first Fire Department in Oregon to take delivery of a motorized fire truck. 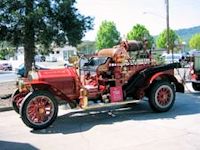 Many of the town's citizens gathered to watch the small engine extinguish its first fire on December 22, 1911. To many of the awe-struck people, it was a hose cart, hook and ladder truck, and an automobile - all in one. The firefighters spent long tedious hours keeping the truck in pristine condition, waxing and polishing the chrome, and making sure the acetylene headlights were always primed.

During this time, the Fire Department was housed in the same building as City Hall, which is now known as the Golden Rule building on 6th street. Within twenty years the department had a paid chief, assistant, and engineer. The fire station was moved from it's location on 6th Street to a new location at 4th and 'H' Streets, which today is the "Firehouse Art Gallery". The original bay doors can still be seen as you drive by on 'H' Street.

Engine 1, after putting in nearly 20 years of service, was sold. Throughout the years Engine 1 collected rust and was nearly forgotten until a gentlemen by the name of Roger May of Mesa, Arizona obtained it. Mr. May restored Engine 1 to its original beauty before donating the pumper back to the City of Grants Pass in 2006 before his death, with an estimated value of nearly $100,000.

To accompany the 1911 pumper, the city purchased a second American LaFrance engine in 1927, aptly named Engine 2. The City of Grants Pass probably did not realize their hefty investment of $13,500 would put in 48 years of service. Shipped from El Mira New York in 1927, the American LaFrance was a thing of beauty to the men who stood by to watch it arrive in the apparatus room on southwest "H" street.

Fire Chief Claud Hollowell and members of the department stood in admiration of the glowing red paint, pure leather seats, nickel plated fittings and finely detailed solid gold leaf art work. Engine 2 would extinguish her first fire a short 3 days after delivery and continue protecting the city from countless fires until the end of a 12 1/2 hour fire at Pacific Custom Loaders on July 23, 1964, when the truck finally was placed into retirement.

During the late 1980s the Grants Pass firefighters gathered donations of nearly $10,000 to bring the pumper back to it's original condition. Both Engine 1 and Engine 2 are still owned by the City of Grants Pass, and displayed in their fully restored condition at the Parkway Public Safety Center. Joining the two pumpers is Engine 3, a 1936 Chevy pumper also fully restored. It is stored at the Hillcrest Public Safety Center and still used for parades.

Around the time of the purchase of Engine 2, the first paid firefighters were hired. From then on, the department became a combination of paid and volunteer staff. During the 1930s, the department began to take a more proactive role in fire prevention and education by providing building inspections which helped prevent the start of fires resulting from faulty wiring, inoperable chimneys and other hazards.

By 1964, the city employed 12 full time firefighters along with thirty volunteers. By this time a new pumper had been purchased to replace the aging 1927 LaFrance. The Fire Department had now grown to house 5 pumpers, an 85-foot aerial ladder, 3 1/2 miles of fire hose, and 47 paid and volunteer firefighters.

By the early 1970s, the single downtown fire station was having a problem keeping up with the increased call volume and increased size of the city. The city pursued a federal revenue grant to help pay the expenses of building a new fire station at the north end of town. The city received $180,000 in grant money and the new fire station cost a grand total of $225,000 to build. The station was erected on the corner of NW Hillcrest drive and Washington Boulevard The Hillcrest fire station, as it would come to be known is still in use today with the 1936 Chevrolet proudly on display for public viewing. 1983 marked the closing of the old downtown station at 4th and 'H' streets and all responses for fires came out of the Hillcrest Fire Station.

Combination of Police and Fire Departments 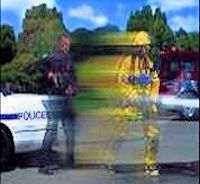 Transitioning to Public Safety in 1984, Grants Pass began to experience severe budget issues with the decline of the timber industry in Oregon. It was decided to try a new and rarely used approach by offering public safety services combining the Police and Fire Departments.

Today, the City of Grants Pass is protected by 30 full-time firefighters operating from three public safety centers. The full-time firefighters are supplemented by 8 student firefighters who are working on degrees through Rogue Community College. Grants Pass Fire / Rescue continues to provide fire protection to a growing community of over 34,000 residents. Today's firefighters are well versed in the knowledge of fire science, building construction, emergency medical services, hazardous materials and other specialized training. Grants Pass continues to receive the fire protection its citizens asked for in 1891!